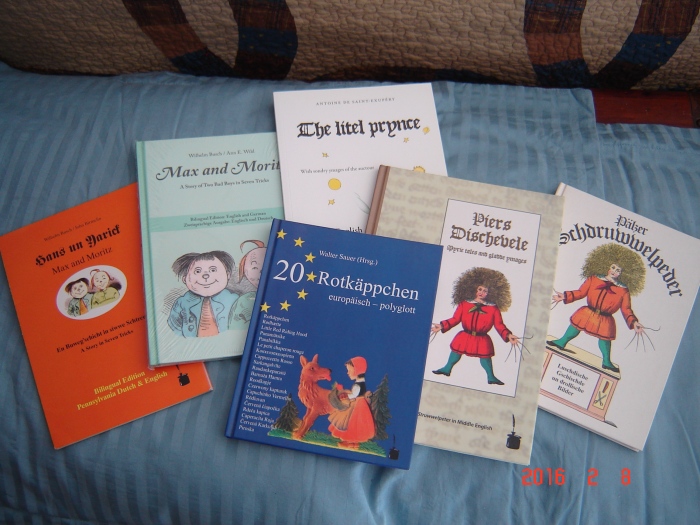 These are some of the wonderful books put out by our friends in Neckarsteinach, Germany. Just look at the languages represented. Walter and Nadine Sauer started their publishing house EDITION TINTENFASS  http://www.verlag-tintenfass.de www.facebook.com/tintenfass.de some years ago and have continuously been publishing certain titles in different dialects. Walter is an expert in Schwabische.

My sisters and I grew up reading (or having read to us) Struwwelpeter and I can still recite some of the warning poems – Fidgety Phil, he couldn’t sit still, etc. This is what Amazon has to say about the author:

First published in 1845. Struwwelpeter (variously translated as “slovenly” or “shock-headed” Peter) has become widely recognized as one of the most popular and influential children’s books ever written. Heinrich Hoffmann was a Frankfurt physician. Unhappy with the dry and pedagogic books available for children at the time, he wrote and illustrated Struwwelpeter as a Christmas present for his three-year-old son. The book relates in verse and pictures the often gruesome consequences that befall children who torment animals, play with matches, suck their thumbs, refuse to eat, fidget at meals, etc.
Written in rhyming couplets and illustrated by the author, the book was an immediate success.

Walter has copies of the Red Riding Hood story in many, many different languages and versions. He told me he has Red Riding Hood’s original red cape!

Language has not been a problem, rather a gift to this delightful, hard-working couple, and their output is amazing.

Nadine (an American) has even written the English translation in a bilingual children’s book of a Mauritian fairy tale. Who knows where their loom of language will take them next?